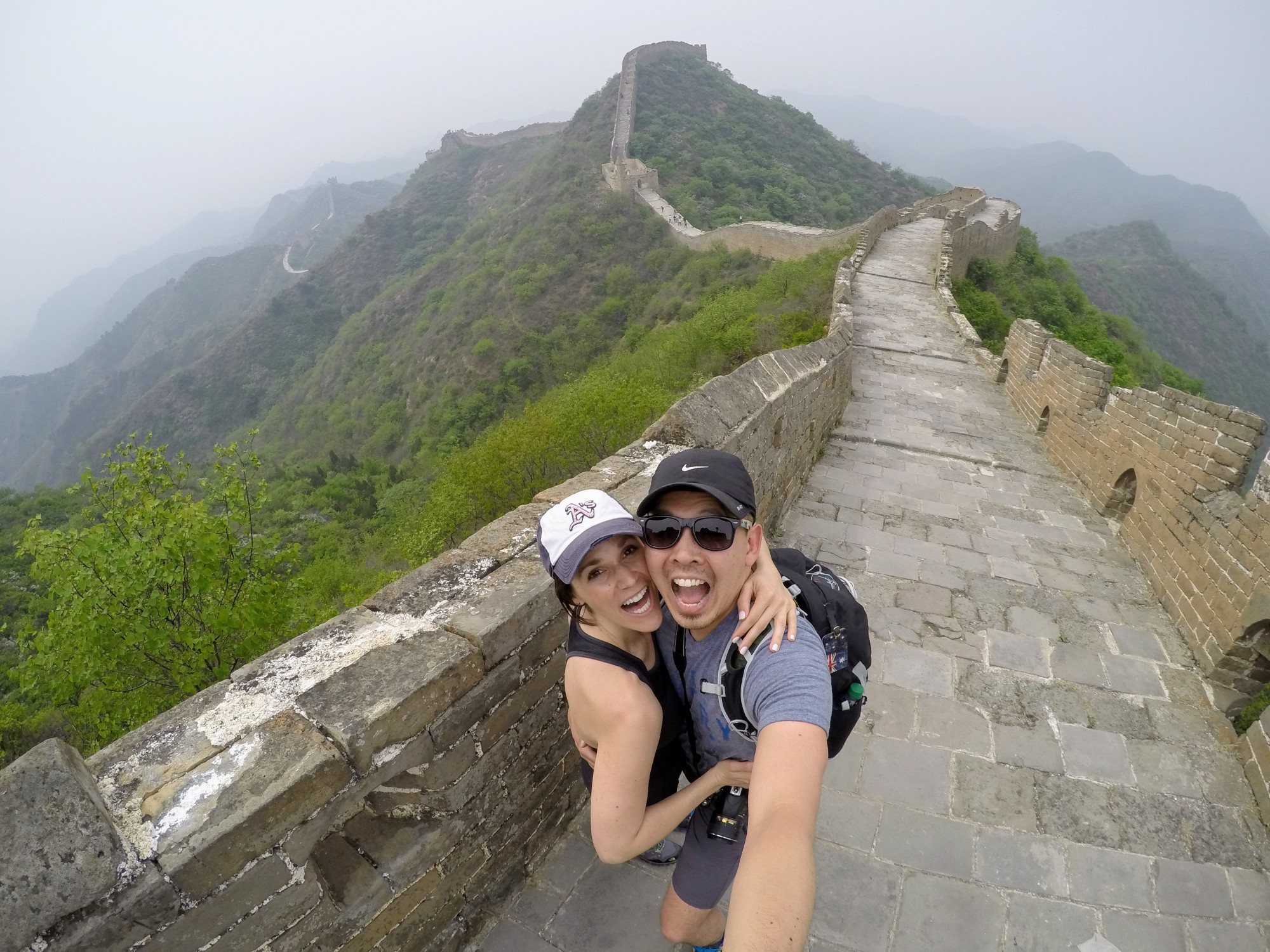 When Justin found $500 business class flights from SFO to Beijing, we jumped on them, even if it was only for a long weekend. We really went to hike the wall and we saw everything else as a perk — but we packed it in and had an amazing time!

The flight over was such a thrill. Business class feels so special to me and we had so much fun flying together!

We stayed at the Grand Hyatt in Beijing and in an effort to kick the jet lag, ventured out to explore immediately after landing. And explore we did! We found “Snack Street” or “Snake Street.” We’re still not sure what it is called. “Snack” because it is a street with tons of food stalls selling snacks or “Snake” because they sell tons of strange animals, insects and yes…even snakes. 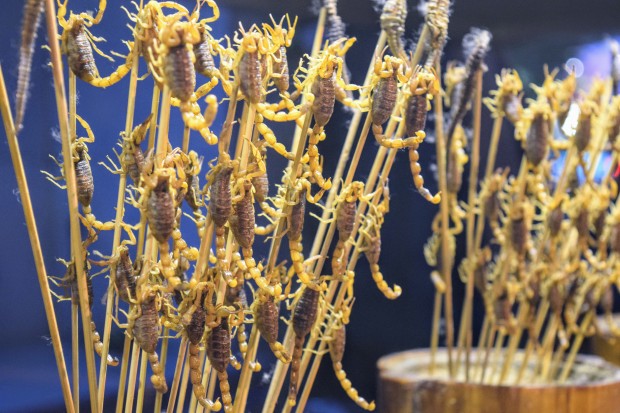 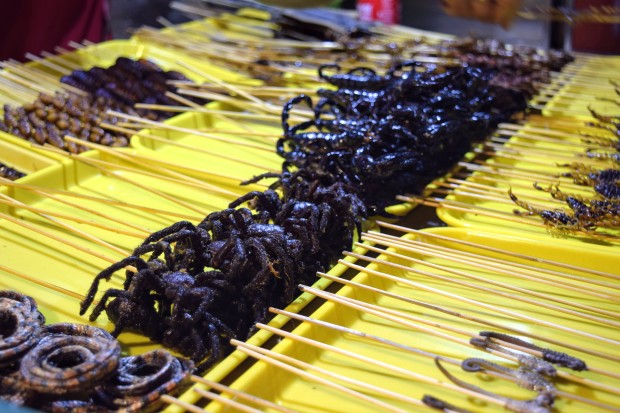 We weren’t adventurous enough to try the squirming scorpions, so we settled on some pretty tame looking meat skewers. When I asked if they were chicken, I was met with a confident nod. Language barrier? Doing anything to sell a skewer? We’ll never know. I took the first bite and it was instantly clear — this was not chicken. Not only was it not chicken, it was not like any other meat I had ever eaten before. I was imagining the worst — which it probably was — but ate it anyway. And it was pretty good. 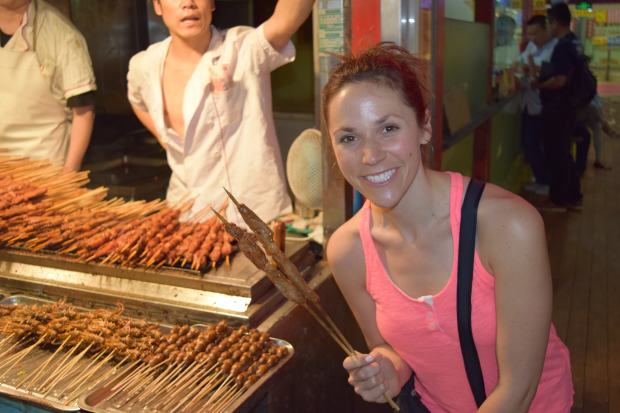 After that adventure, we were actually quite hungry so we ended up getting some restaurant food after that — which totally hit the spot!

The next day we set out for our first day at the Great Wall, hiking the part called Jinshanling. It was just like the movies — so old and majestic. It was hard to believe we were actually there! 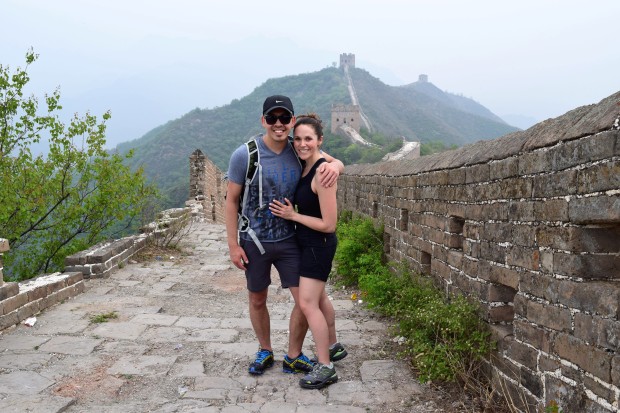 It was a beautiful section of the wall and the hills and twists made for stunning views. 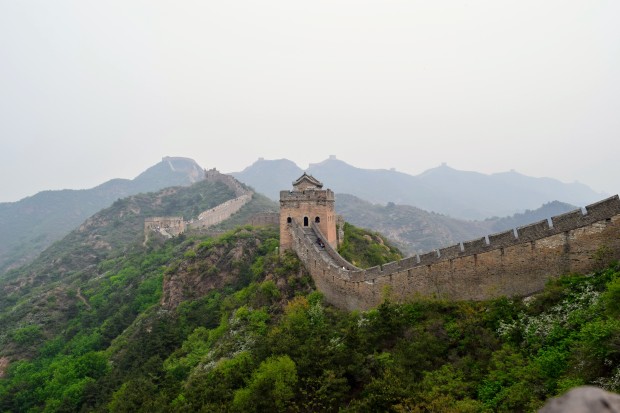 And they even had some important warnings for tourists: 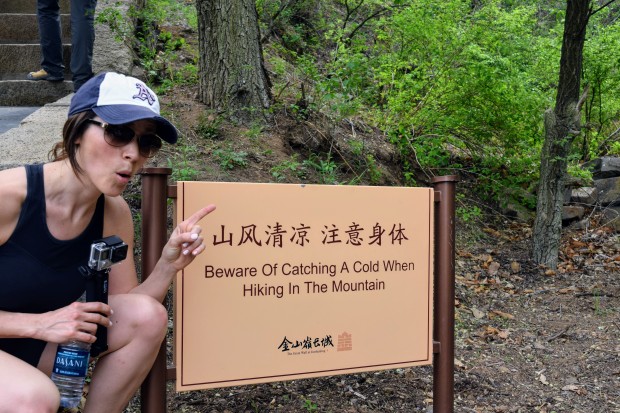 That afternoon, our guide brought us to a hole in the wall local restaurant in town. He waved his hands and mentioned a few things to the owner and before we knew it, our table was filled with all sorts of hot goodness. At least there were no skewers of dog meat (which is what we likely had on Snack Street). 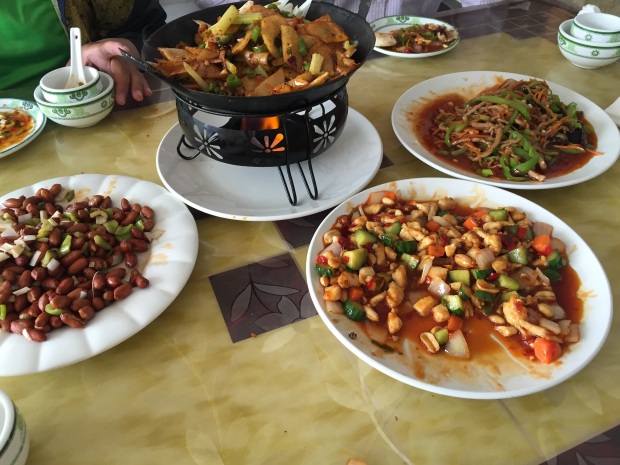 Traffic in Beijing was awful and we spent about 4-5 hours each way travelling to and from the Great Wall, so in order to get an early start at another part of the wall called Mutiyanyu, we stayed over at a cute guesthouse called the Brickyard near the wall. The room at the guesthouse was charming. Pros: Views of the Great Wall from our bed. Cons: No door on the bathroom. We got used to that pretty fast.

One of the highlights of the trip was hiking Mutianyu. We arrived before it was open and were shocked to find ourselves alone at the top of this gorgeous expanse of wall. We milked every tourist-free shot! 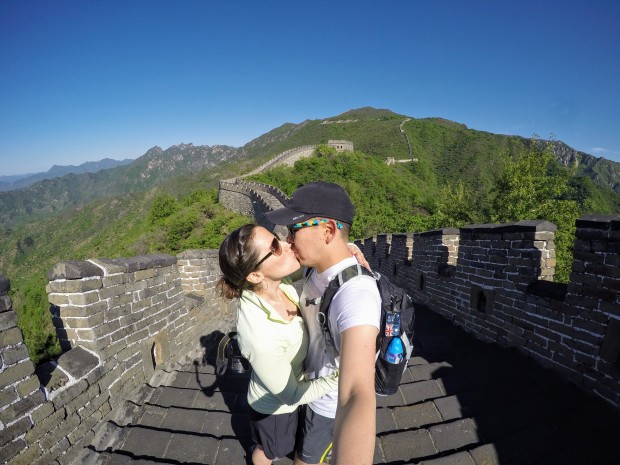 We even did the jumping shots. Justin was able to do these on his first attempt, but it took us 14 tries to get me in the air at the same time as him. Good thing we had plenty of time alone a the top of the wall! 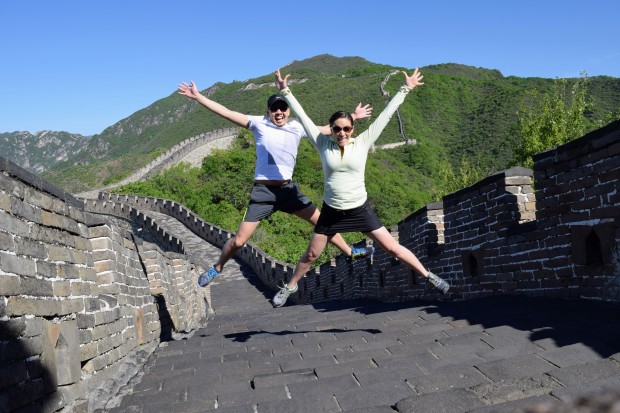 The whole afternoon up there was incredible. We climbed some pretty steep stretches and even after a few hours, it was pretty empty.

Given that the wall is over 2,000 years old, it constantly needs repairing and it was so interesting to watch the workers repair the wall. 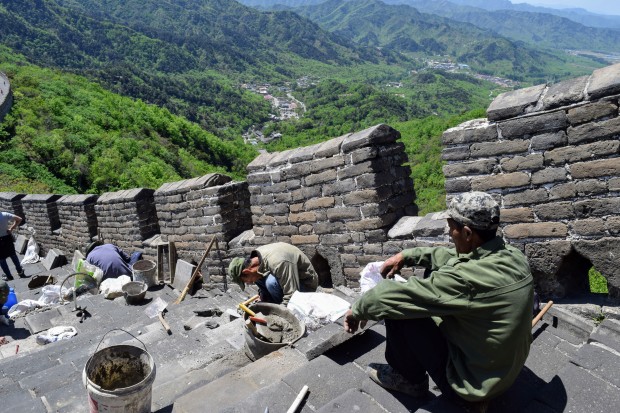 When we were done at the top we got to ride alpine slides to the bottom. It was a blast!

We drove back to Beijing that afternoon and were pretty tired by the evening, so it was perfect timing for a dip in the hotel pool. This hotel pool was like no other! Housed deep in the basement, it was a massive oasis, straight out of Avatar or Fern Gully. It was so awesome we had to run back up to the room to get our camera!

Other highlights from Beijing

We spent a very rainy day visiting the Forbidden City, which is right across the street from the famous Tienanmen Square. The buildings in the Forbidden City were beautiful, but it was so windy and wet that we pretty quickly moved through it and made our way back.

On the way back we decided to find the highest rated Peking duck in the area. And it was excellent! They carved the duck at the table and I was amazed with what ended up being the best part. They delicately sliced up the crispy skin and placed it on a little saucer. They then placed a bowl of sugar in front of us and demonstrated dipping the crispy skin into the sugar. It tasted like candy skin — but was delicious! Total highlight of the meal!

Justin surprised me with tickets to go see the Beijing Acrobat Show at Chaoyang Theater. The tricks were pretty incredible! 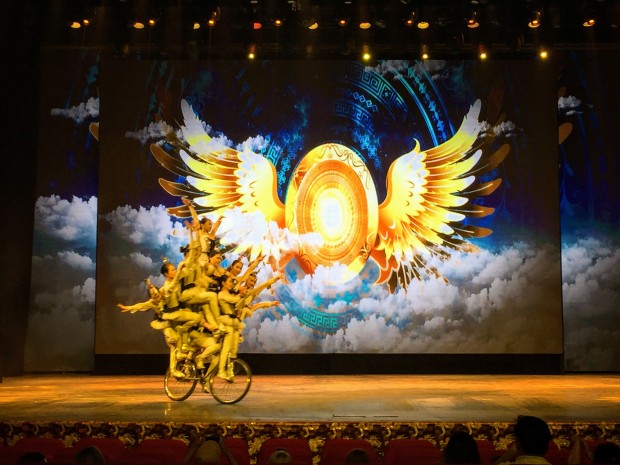 Overall this was a whirlwind, fantastic trip. Totally unexpected and spontaneous. Can’t wait for more trips like this!

2 thoughts on “Walking the Great Wall in China”