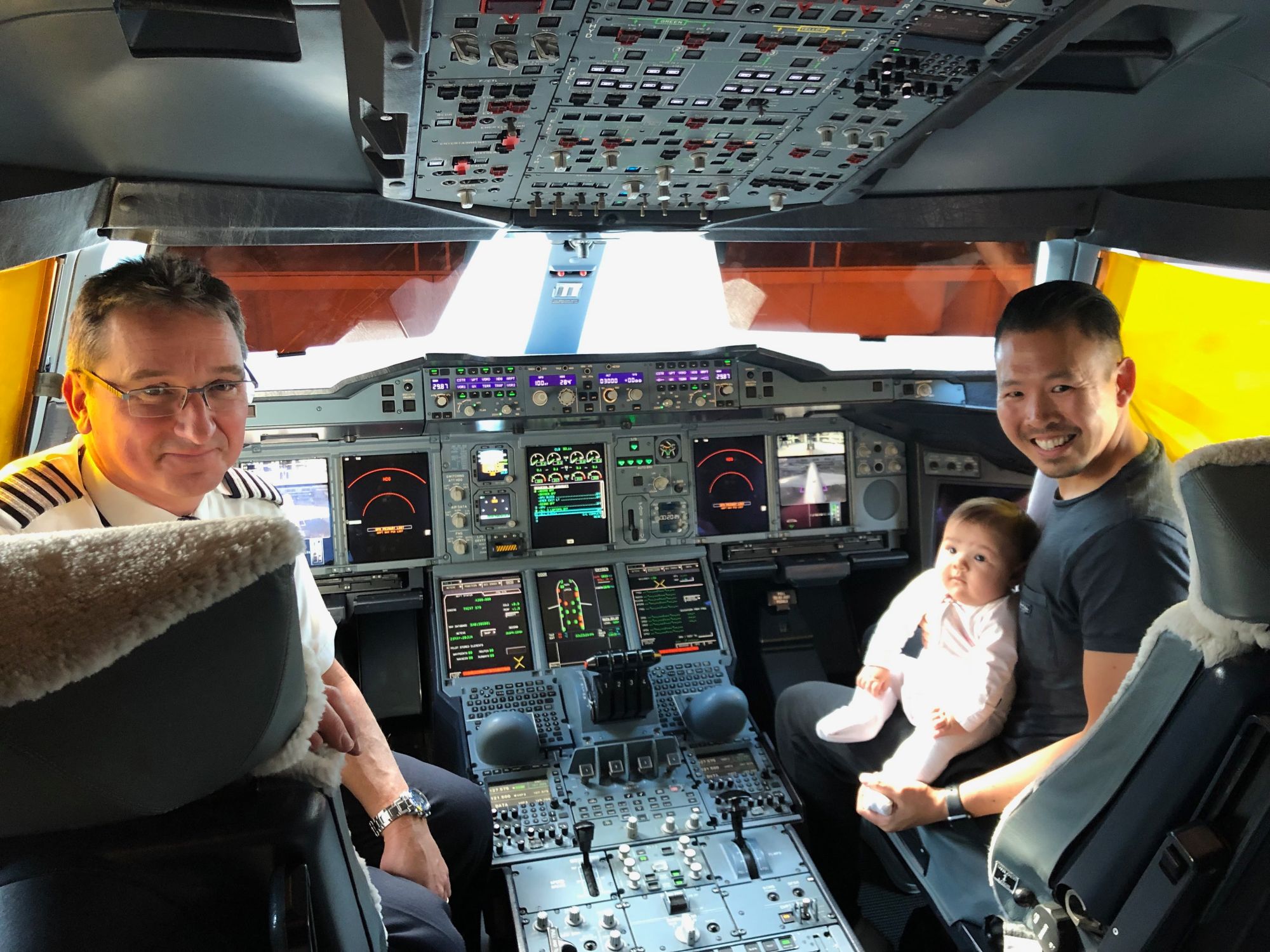 When Juliette was one month old, in our sleep-deprived state, we decided to book a two week trip to Barcelona. We weren’t thinking clearly at the time, other than knowing we love to travel and couldn’t wait to share that love with her. We also knew that traveling with a baby would be different (and inevitably harder) but didn’t want to stop all together. So we pulled the trigger.

It ended up being the best idea ever!

The best age to travel with a baby

We took Juliette on her first flight when she was eight weeks old. That was a five hour flight to Maui. At that age, she slept the whole way and barely even made a peep. It was a great time to travel with her (the full story here plus our packing list).

Juliette was three months old when she took her second trip. My mom and I flew with her to Boston to visit my family. That was a six hour, redeye flight from San Francisco to Boston (a surprisingly easy flight for her, but exhausting for me). So, in going with that pattern you’d think our next flight would have been a seven hour flight. Instead, we flew from San Francisco to London (10.5 hours) and then London to Barcelona (2 hours). We really went for it.

There is a big difference between nighttime long-haul flights and daytime long-haul flights. Good thing for us, the first one we took was a nighttime flight. So, despite the length of the flights and the very long travel day, it was amazingly easy because we stayed on her schedule and she slept most of the time. We booked a bassinet seat for her on the plane and Justin bought a Cozigo cover while in Australia which went over the bassinet and blocked out the light, germs and onlookers peering in at our cute baby. We kept it unzipped in front, and it helped her sleep very well. 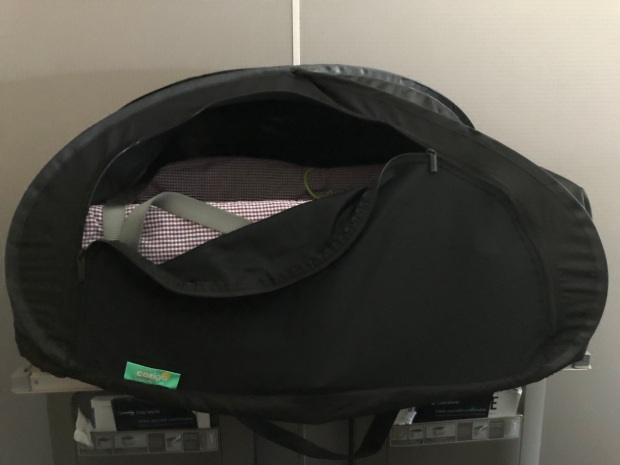 Like I had in the past, I nursed Juliette upon takeoff and landing. After we took off, I fed her, we changed her and then got her swaddled for bed — yes, we brought her regular bedtime swaddle for her to use on the plane. It was around 8:30pm so it was close to her regular bedtime and she quickly went down to sleep in the bassinet. We got her up twice for feedings (more like “Dreamfeeds” since she was in a sleepy state and we just wanted to top her off by preempting the demon-like hunger screams) and she ended up sleeping about eight hours in total. It was incredible. Having a bassinet also meant we could sleep without holding her or having her strapped to us. It was so freeing!

Daytime flights are a bit different. We weren’t really sure if she’d sleep more than the usual 1-2 hour stretches she often does in the daytime. We braced ourselves for a long flight.

Well, it definitely wasn’t as easy as the night flight! She was pretty fussy for the first few hours but then settled in quite nicely into her bassinet and we had to wake her up six hours later as we were preparing to land. 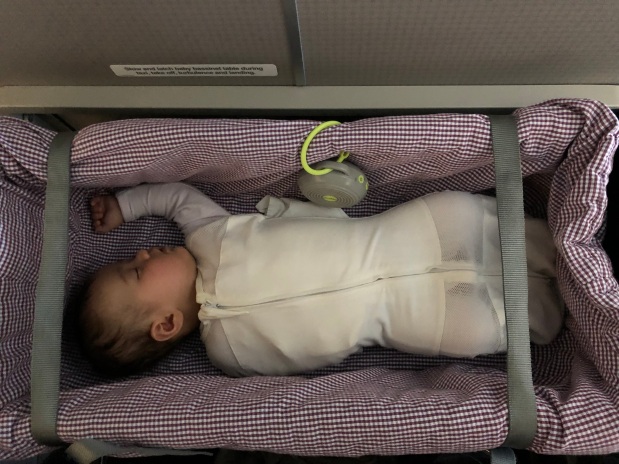 In conclusion, if you can take night flights, they are awesome and as much of the flight time that coincides with your baby’s nap/sleep time is ideal.

We don’t yet know what it is like to fly with a baby who is sleep trained (or too large for a bassinet), but flying with Juliette when she was two months, three months and now three and a half months has been so easy because she is small, portable and sleepy!

We flew all three fair classes during this trip. The biggest difference was space. In Premium Economy, we were lucky to have the bulkhead seats with just two seats together so we had a lot of legroom, a bassinet and no one to step over to get out to the aisle. It was so comfortable for us.

On the way home from London, Justin brought out his ninja flight search skills and upgraded us to business using an incredible airline mile hack. In typical Justin fashion, he didn’t tell me about it, so when we got on the plane, he surprised me by stopping at the seats in business class and then telling me this was where we were sitting. I may have teared up a bit.

Our business class seats also had a bassinet, which was the same as the bassinets on the other parts of the plane. The difference was the space and seats for us. We got to lie flat and sleep — which was absolutely incredible. It was such a treat! 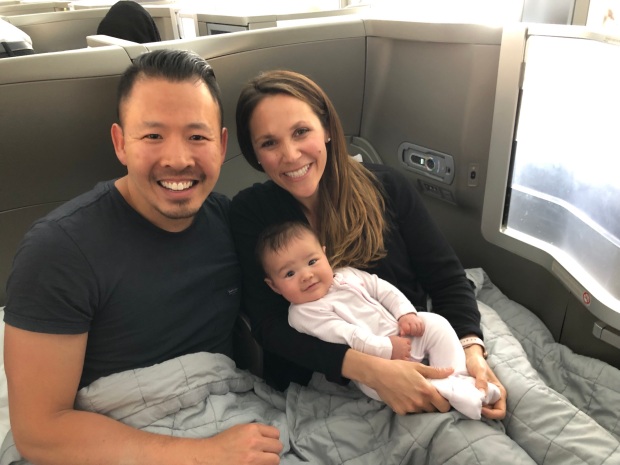 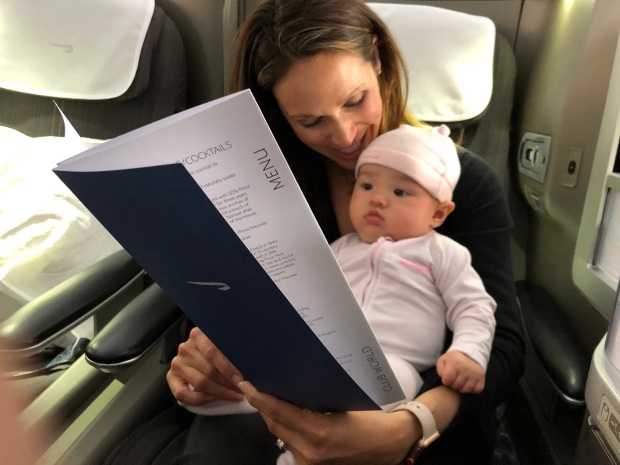 We were excited to be able to visit the cockpit on both the flight to and from London. The captain gave Juliette a little flight logbook and also invited her to sit in the pilot’s seat. Such a lucky girl! 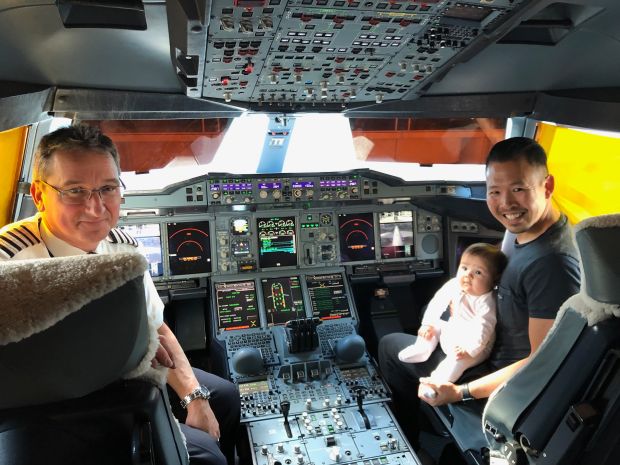 Deciding where to travel with a baby

When it came time to book this trip, we knew we wanted to travel for two weeks and gave a bit of consideration to where we wanted to go. This will be a very personal decision, but here’s what helped us make our choice:

Getting her (and us) acclimated to local time

Juliette’s first night of sleep was super off — as was ours. We lightened up on ourselves to not have to adhere to specific bedtimes for the first few nights. Given how late most people eat in Barcelona, we didn’t want to feel stuck in our apartment after 7:00pm and with a baby this small we could be mobile! We eventually got on a schedule where we ended up still giving her a 7:00pm/8:00pm feeding, putting her in the stroller and then she slept while we went out to dinner.

We then came back, did a “Dreamfeed” and put her to sleep in her Pack and Play. She had slightly different bedtimes for the first several nights but at her age, that wasn’t much of a problem. The bonus was that on nights when she went to bed later, she also slept in later — one morning she didn’t get up until 9:00am — we really all were on vacation!

This was also the first trip where she was sleeping in a different room than us, so we took some time to “show her around” her new room and get her used to that. After the first night she seemed to be okay being in a strange place. Or this is just our first experience of her not really needing us as much as we may want her to!

For the most part, to get over jet lag, we tried to live on the local time, stay hydrated, and be outside. Seeing the sun during the day and the darkness at night helps the body regulate, and that goes for her too. We took one to two days to transition but then got on a nice schedule.

What are your tips for surviving international trips with a baby? Any best practices for flights or secrets for packing?

One thought on “Our first international flight with a baby”